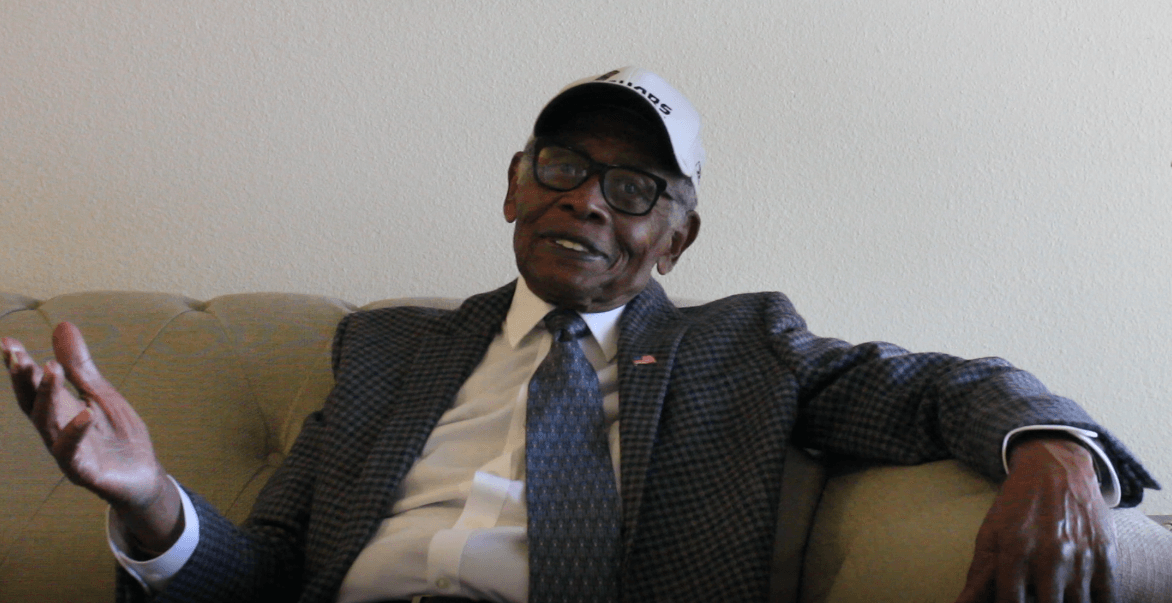 This month’s Rancho Belago Resident Spotlight is Charles A.

Charles was born in Groves Hill, Alabama as the oldest of three children. He had two younger sisters, and his mom raised them as a single mother. His father had gone to Illinois and as Charles put it, he “forgot to come back.” When Charles graduated high school, he went into the United States Army.

During his basic training, Charles was on the 101st Airborne Division, also known as the “Screaming Eagles.” However, he didn’t want to go as a paratrooper because he was afraid of jumping. Even the fact that they
offered them $50 more a month couldn’t convince him. Instead, he stayed in the regular infantry. He was stationed in Berlin, Germany for 18 months before discharging as a Private First Class after two years of service.

Charles shares that he learned disciplines and the things his mother couldn’t teach him growing up. He found the whole experience to be interesting and enlightening, and he thinks the draft should come back to get these young men back into service. He decided not to re-enlist because he wanted to get his education.

He came to California and put in a couple of years at Valley College studying aircraft maintenance. However, he could not find a job in that field. Charles went to work for a construction company in San Bernardino as a laborer for about a year. The City of San Diego has a job opening for a city inspector, which was what he wanted to do. Charles decided to buy a home in San Diego and inquired about the job. They asked that he go back to college for one year to take a course in city government and city management, so he did.

While waiting for an opening with the City of San Diego, he applied to EL Yeager Construction Company out in Riverside. At that time, it was one of the top ten in the nation. The company hired him and then sent him to engineering school for 3.5 years. He worked with them for over 20 years. He shares it was a great family orientated company, and there was a lot of opportunities for employees to grow in the field.

When he discharged from the military, he did not want children. He did not get married until some time later. He met his wife, Dorthea, shortly after she graduated from nursing school. She was outside hanging up clothes, and he noticed her. He went over to talk to her and asked for her phone number. They spoke and dated, and nine months later she accepted his marriage proposal. They had two boys and two girls together.

Charles shared that when they were first married, he didn’t go to church. He would wake up on a Sunday morning, pack up his cooler with beers, and go fishing, while his wife took the children to church. Charles recalls that she never fussed or nagged him about going to church. She only would tell him he missed a good sermon while they ate dinner each Sunday evening. After a while, his curiosity got the better of him, and he went to church with her and the kids. He enjoyed it and from then on attended himself.

However, the 8 a.m. service was too earlier for Charles. He would fall asleep. His wife suggested he attend the 11 a.m. instead. She would be exiting the church as Charles was entering for service. When they met, they would kiss each other, and people would make comments like, “there go the lovebirds.” He’s glad he started going because Charles always believed in the Lord, but he wasn’t serving Him as he should have. He later wound up as a deacon on the church’s board.

Moving On Is Hard to Do

Charles shares that he and Dorthea had a beautiful marriage and a wonderful time together. However, that time was shorter than he expected. Dorthea later developed breast cancer. She’d seen a doctor before they left for vacation and they found a lump on her breast. He told them to go on vacation and see him after they returned. They did a biopsy on the lump, and she received a cancer diagnosis. They did an operation, and she went on a few more years before she passed away in 1987.

Charles shares that her passing wrecked his world for a minute. He still had two kids at home, and he’s promised her that he was going to get them educated and grown before he did anything else. He held to that promise and shares that all four grew up to be good kids. His eldest son got his bachelor’s in radiology and is currently working on his masters. Charles’s eldest daughter is a psychologist, and his other daughter was a dental hygienist. His youngest son took on trade. Charles shares that not when he sees kids, he gets excited. He’s got grandchildren and a great-grandson. After some time, Charles’s sister introduced him to one of her friends whom she’d known for years. The two got married, and he gained four more children.

After Charles retired, he moved to Florida and stayed there for 25 years. It didn’t work long term, and he came back to live with his daughter. His daughter was recovering from an injury and was preparing to return to work, however, she didn’t want to leave him at home by himself. He and his son happened upon Renaissance Village Rancho Belago and stopped for a tour.

This Rancho Belago resident was delighted by the employee that greeted him and felt like he could move in that day. After his daughter gave her stamp of approval, he moved in. Charles shares he’s happy and feels secure. He’s met lots of nice people and says the staff is wonderful. He loves that if they don’t see you around, they are quick to check in on you. Charles says we treat him like family and he enjoys the program and activities offered. We’re proud to have you as a Rancho Belago resident, Charles!